John Mellencamp loves painting, but he doesn't hold any attachment to what he creates.

"I really have no love for any of these paintings," he said during a roundtable discussion with a few writers Saturday afternoon in conjunction with "The Art of John Mellencamp," which opens today at the Butler Institute of American Art.

He proved he was serious a few minutes later.

During the conversation, a contributing editor from Art+Auction magazine asked Mellencamp about the use of text on his paintings and mentioned he didn't care for the word "Puppet" in bold type across a portrait called "Puppet."

About a half hour later, Mellencamp came back in after a cigarette break and walked up to "Puppet" with a black marker and started drawing lines through the white type. 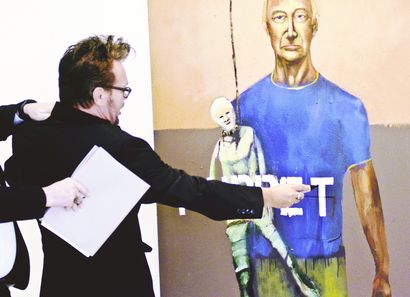 His cavalier attitude toward the canvas shouldn't be interpreted as Mellencamp not taking painting seriously. His passion for the craft comes through through in his words and the 40 works that are on display through Jan. 12 at the Howland branch.

Art nearly became his first career. When Mellencamp graduated from a junior college in the early '70s at age 20, he had three possible goals - study art, pursue music or become a dancer.

"I went to New York to look into the Art Student League, to learn how to paint, and the (oddest) thing happened - I got a record deal," Mellencamp said. "I didn't have any money to go to the Art League, and these people wanted to give me money."

First as John Cougar (a name given to him by a manager) and later under his own name, Mellencamp became a multi-platinum-selling rock star. At the peak of his fame in the late 1980s and following the end of his second marriage, he took a break from performing and finally made it to the Art Student League, where he studied briefly with portrait artist David Leffel. He's been painting ever since.

"I figure now at 62, I've got a lot of catching up to do," he said. "Forty years have passed me by when I could have been painting that I was writing songs."

Mellencamp said there are similarities in songwriting and painting, and his experience with both is one of the reasons an exhibition last year at the Tennessee State Museum was titled "Nothing Like I Planned."

"That's the statement of my life," he said. "Any time I ever sit down and go, 'I'm going to make this happen this way' - and this is anything from having a conversation to a painting to writing a song - it never works out that way.

''That's what makes painting and songwriting so similar. I'll sit down to write a song and won't have a clue what I'm going to write. I have no inspiration. I'm not inspired. And more often than not, I'll end up with something. Oftentimes it's s--, but sometimes it's not."

And the ones that aren't sometimes are a surprise. One painting in the Butler show that he said always gets a strong reaction is called "Scooter," named for his personal assistant, who suffers from debilitating migraine headaches.

"I did it in about a hour to cheer him up. 'Hey, Scooter, is this how you feel?' It was a joke painting."

But it's become the piece that folks single out when it's been exhibited or when people visit his studio.

Mellencamp, wearing a tailored black suit and a white V-neck shirt, was jovial and talkative, answering all questions asked with detailed, sometimes tangent-filled responses. But he said he's really not comfortable talking about his painting and having his work seen isn't the driving motivation for doing it.

If visitors to the Butler Trumbull Branch like what they see, they should thank Bob Dylan. Mellencamp started showing his work after Dylan visited his studio and commented on the hundreds of paintings - some with growing mold - stacked along the walls.

"Bob Dylan came to my home and said, ' ... Why don't you put these out for people to see?' Why would anyone like to see these paintings? 'Well, I like 'em.' Does anyone really want to see them? There are great paintings in this world and I'm still learning.' He goes, 'Put 'em out.' Bob's really the one who talked me into it."

Mellencamp arrived in town Friday and attended a reception Saturday evening for Trustee Circle members of the Butler. He spent Friday afternoon in Youngstown checking out the museum's permanent collection.

"I think you guys are very fortunate to have that place," Mellencamp said. "I make it my business when I'm out on tour to attend (museums), and I've go to a lot of, what we call in the music business, secondary markets. And there are a lot of places that you don't have that. And then a lot of these museums are state-operated, and the arts have been sold off for other stuff - like parking lots."