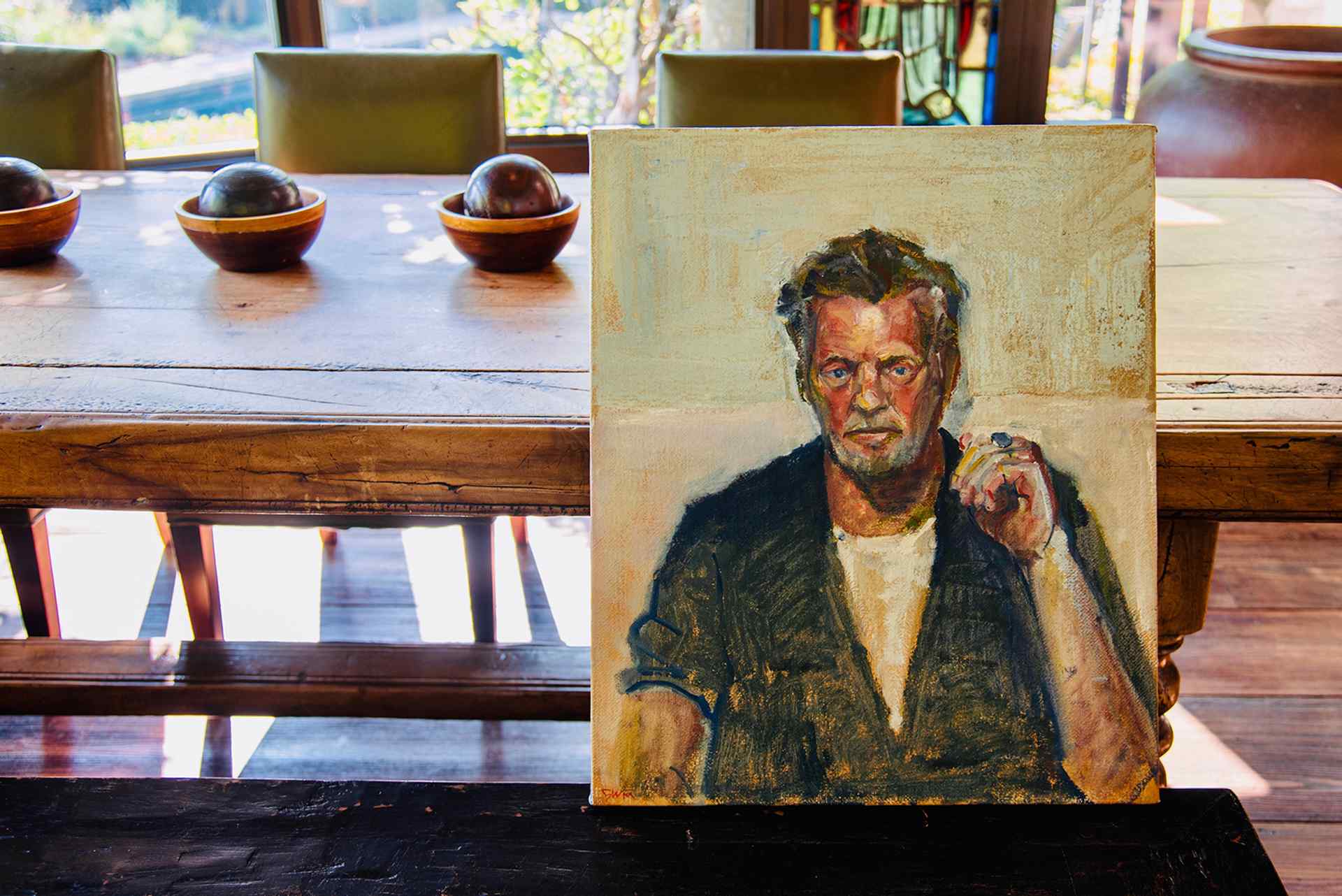 "Music is a handy way of saying what's on your mind. No mind. No music."

John Mellencamp not only has a mind, but better yet, he's got a mind of his own. He's not a card carrying anything. Like my father who grew up in Oklahoma, John started out as a son of the mid-west, heir to generations of farmers who passed down ways to fight all kinds of catastrophes, both natural and man-made; first with a fist then with a voice. My father traveled a similar road in Oklahoma, learning the skills of fist-fightin and later as voice-fighting. Early on, power rested with the strongest punch. For John, the power of the punch also transformed into the power of song. This book is his unique tale, tracing his journey to become an international rock star, an honored songwriter, a serious painter, and a spokesman for small farmers, civil rights, and a slew of other righteous causes. It takes a fighter to achieve all of this, and fighters are often hot headed, impulsive and laser focused on their sense of right and wrong. Their punches are meant to land and fall their opponents; Injustice, Racism, and even Capitalism itself. My father sang, "When I was a little boy, first I had to grow. Then I had to guess. Then I had to know. But I had to study fighting most of all." Heck. Someone's got to be in the fray. Someone's gotta be the one not to be afraid of anything or anyone. From a lifetime of searching for clues trying to understand what makes this world tick, it seems his mid-west roots only served to strengthen him for the job. His tale is inspirational, prodding all of us to flex our own muscles for righteous causes, without fear or hesitation."


Born October 7, 1951 in Seymour, Indiana, John Mellencamp fell in love with music at an early age and was gigging in local bars and fronting a soul band by the time he was 14. His professional music career began in earnest in 1976 when MCA Records released his first album, The Chestnut Street Incident. His manager dubbed him Johnny Cougar out of his belief that nobody would buy a record by anybody named Mellencamp. John protested but was overruled and eventually, of course, reclaimed his birth name as his public name.

After releasing a few albums, he broke out in 1979 with his first hit, "I Need A Lover" In 1982 his fifth album American Fool was the year's best-selling album on the strength of two huge hits, "Hurts So Good," and the number 1 single "Jack & Diane," The albums that followed in the 80's, Uh-Huh, Scarecrow, Lonesome Jubilee, and Big Daddy, were released under the name John Cougar Mellencamp. Hit singles during this period included "Crumblin Down," "The Authority Song," "Small Town," "Rain On The Scarecrow," "Lonely Ol Night," ""R.O.C.K. In The U.S.A.," "Paper In Fire," "Check It Out," "Cherry Bomb," "Pop Singer," and "Jackie Brown."

Mellencamp took the music on the road with a band that many considered the best in the business, playing approximately 1,000 shows around the globe during the decade. In 1985, John's concern for the plight of the American farmer, which had been voiced in the Scarecrow album, brought him together with Willie Nelson and Neil Young in launching Farm Aid. It became an annual event and has helped make people aware of the issues farmers face and how they affect on the entire nation.

By the early 1990's "Cougar" was finally gone from John's name and a string of successful albums as John Mellencamp--Whenever We Wanted, Human Wheels and Dance Naked (including the number 2 single "Wild Night")--were released. In 1991 John made his film debut, starring in and directing Falling From Grace, a modest box office success that was well received by critics.

John suffered a mild heart attack while touring in 1994 in support of Dance Naked. This forced him to take a break from his music career, but he returned strong in 1996 and released Mr. Happy Go Lucky, which featured the hit "Key West Intermezzo" (I Saw You First). Healthier and happier, he returned to touring in 1997 and continued to write and record frequently. Releases included 1998's John Mellencamp, 1999's Rough Harvest, 2001's Cuttin Heads, and 2003's Trouble No More . Hit singles during that time ranged from "Your Life Is Now" to "I'm Not Running Anymore" to "Peaceful World." John continued to tour throughout 1999, 2001, 2002, 2005 and 2006.

Mellencamp was inducted into the Rock and Roll Hall of Fame in 2008 and is a member of the Songwriters Hall of Fame. He’s a Grammy-winner and the recipient of numerous awards including The Woody Guthrie and John Steinbeck Awards, ASCAP Foundation’s Champion Award and their highest honor the Founders Award, the Americana Music Association’s Lifetime Achievement Award for Songwriting and the Billboard Century Award, amongst a host of other honors.

Words & Music: John Mellencamp’s Greatest Hits was released in 2005. It was his first career-spanning collection and featured 35 of his biggest hits plus two new songs, one of which, “Walk Tall,” was backed with an award-winning video that condemned discrimination. It was followed in January of 2007 by a new studio album, Freedom’s Road, which featured the hit song “Our Country.”

By summer of 2005, he had already begun working on his next album—a collaboration with producer T Bone Burnett, Life, Death, Love, and Freedom—which was released in July, 2008. No Better Than This was also produced by T Bone Burnett and was recorded at historic facilities in the American South: The First African Baptist Church in Savannah, Sun Studio in Memphis and Room 414 of the Gunter Hotel in San Antonio where Robert Johnson recorded more than 70 years earlier. For the record, Mellencamp’s songs were recorded on a 55 year-old mono tape recorder using just one microphone. The album was released in August of 2010 and the 2009 summer tour of minor league baseball parks with Bob Dylan and Willie Nelson that spawned it are documented in It’s About You, a documentary film by Kurt and Ian Markus that premiered at the SXSW Film Festival in March of 2010. That summer, John co-headlined shows with Bob Dylan and then started his No Better Than This theater tour in his hometown of Bloomington, IN showing It's About You each night as the opening act.

The release of No Better Than This was preceded a few weeks by the four-CD box set, On The Rural Route 7609, made up mainly of versions of some of his classic songs. These included two tracks from iconic individuals: race relations expert Dr. Cornel West (who dramatically recited the lyrics to “Jim Crow”) and Academy Award-winning actress Joanne Woodward (John’s favorite actress) who provided an emotionally charged reading of the lyrics to “The Real Life.” Universal issued John Mellencamp 1978 – 2012, a 17-CD set that encompasses all of the key albums of his career, and in July, 2014 Mercury/UME released John Mellencamp Performs Trouble No More Live At Town Hall, a live album that comes from a July 31, 2003 New York City show at Town Hall, one of only two shows performed upon the release of Trouble No More.

In May, 2014 Republic Records announced an unprecedented “lifetime” recording contract with John. Mellencamp continued to evolve artistically with Plain Spoken, his 22nd full length album executive produced by T Bone Burnett, first release on Republic Records and first new music since 2010’s critically acclaimed No Better Than This. John went on to complete an 80 city North American Tour in 2016

John's 2017 full-length album, Sad Clowns & Hillbillies, featuring Carlene Carter, is his 23rd over the course of a remarkable career. The album was followed by a tour with Carlene and marked a return to the musical eclecticism that is a reflection of John’s wide-ranging musings on life, showcasing a poet who has wisely used the years between youth and the present day to become an absolute master of songwriting and interpretation.

John’s self-narrated, musical journey Plain Spoken: From The Chicago Theatre premiered on Netflix in February 2018, and was released on DVD+CD and Blu-Ray+CD. The film presents John and his full band performing at the Chicago Theatre in October 2016, and blends performance footage with personal commentary from Mellencamp himself.

In 2018, a compilation album consisting of various handpicked cover songs titled Other People’s Stuff was released on Republic Records. The album landed Mellencamp at #1 on Billboard’s Top Rock Albums Chart.

Most recently in 2019 John embarked on a tour of “The John Mellencamp Show,” which featured the icon’s classics plus new material.

The Good Samaritan Tour, a new live album and documentary, was released in July 2021. The documentary, which is narrated by Academy Award-winner Matthew McConaughey, chronicles Mellencamp’s historic free tour in 2000 when he performed on street corners and in public parks across the country.

John recently confirmed a landmark collaboration with Turner Classic Movies, taking on the celebrated role of guest programmer for two nights on the network. He is continuing to work with TCM on numerous projects together, including a tour sponsorship—the first sponsorship in all John’s years of touring.

In the fall of 2021 John came together with Bruce Springsteen to duet for the first time on the single and video “Wasted Days,” the first single from John’s forthcoming 2022 LP. The single was heralded by critics with NPR Music describing the song as “an implicit message about making the most of the years, months and minutes we've got left.”
John also continues to focus on another facet of his artistic expression: painting. His style has progressed over the years as evidenced by several museum, and gallery exhibits and published portfolios, and in recent years he has increased his output by completing over 300 new works. He has had exhibitions with Miles Davis in LA, solo exhibitions at the famed Butler Museum in Youngstown, Ohio, and several at ACA Galleries in New York City including Binding Wires, the two-man exhibition featuring works by John and Robert Rauschenberg. John’s most recent exhibition, “John Mellencamp Paintings and Assemblages,” at the Museum of Art Deland, in Deland, Florida ends March 27th.  Currently, John’s Gibson guitar with “Fuck Fascism” written on the front is on loan to the Woody Guthrie Museum for their exhibit “Folk the Vote, Music and Politics.”
The Ghost Brothers of Darkland County, a musical with music and lyrics by John Mellencamp, a libretto by author Stephen King. The musical saw two national tours, and has now partnered with Broadway Licensing. Mellencamp is resuming production and rehearsals of his original play Small Town Play, directed by Kathleen Marshall, written by Naomi Wallace and produced by Scott Landis and Federal Films.
The unique instrumentation of John’s band and his poignant songs about everyday life in the American heartland are widely credited with being the forbearer of the Americana/No Depression genre of rural-inflected music. Mellencamp continues his journey as the walking embodiment of heartland rock: passionate, plain-spoken and a self-proclaimed rebel.
John Mellencamp continues to live and work in Bloomington, Indiana. He is the father of three daughters, Michelle, Teddi Jo and Justice and two sons, Hud and Speck.

WANT TO KNOW MORE?
GET ON THE LIST FOR TOUR DATES AND EXCLUSIVES.