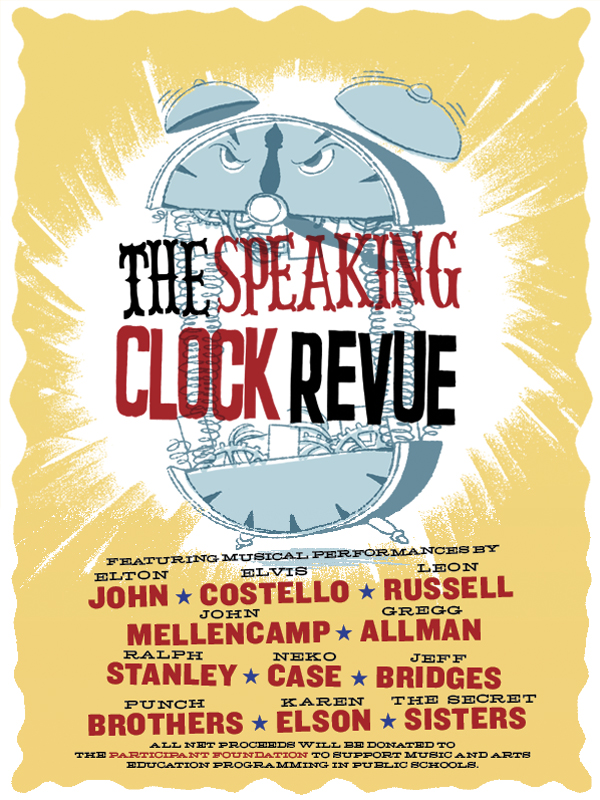 T Bone Burnett will premiere The Speaking Clock Revue – a multi-artist concert extravaganza – on October 16 at the Wang Center in Boston and October 20 at the Beacon Theater in New York City. Both evenings of the Revue will feature performances by Elton John & Leon Russell, John Mellencamp, Elvis Costello, Gregg Allman, Ralph Stanley, Jeff Bridges, Punch Brothers, Karen Elson, and newcomers The Secret Sisters. In addition, Neko Case and Jim James from My Morning Jacket will join the lineup in Boston and New York respectively.

The concerts will be presented in a revue format with a house band consisting of the players featured on numerous Burnett-produced recordings. Tickets for The Speaking Clock Revue will go on sale Monday, September 27 at noon, through Ticketmaster (http://ticketmaster.com).

This edition of The Speaking Clock Revue is presented with Participant Media in conjunction with the release of the documentary film Waiting For “Superman”, from Academy Award-winning filmmaker Davis Guggenheim (An Inconvenient Truth, It Might Get Loud), which follows a handful of promising students through a U.S. public school system and offers hope by exploring innovative approaches by education reformers who refuse to leave their students behind. All net proceeds from these shows will be donated to The Participant Foundation to support music and arts education programming in public schools.

In conceiving The Speaking Clock Revue, Burnett aims to bring to the live stage a musical event that conveys the excitement he and his fellow musicians experience when creating music in the recording studio. “The privacy and the intimacy of the studio afford artists the freedom to create, but something thrilling happens in getting away from the machines and into the live communication of real time storytelling in the larger community. The first tour I went on, my first job in show business, was on The Rolling Thunder Revue, and I've come back to that type of collaborative and extraordinarily rewarding experience from time to time. We are looking forward with great anticipation to getting The Speaking Clock Revue up and running this fall and continuing it in the years to come,” he said.

Burnett’s decision to join with Participant Media to donate all net proceeds from the concerts to support music and arts education came after he saw an early screening of Waiting for” Superman”. As he explains, “This film deals most powerfully with the troubling state of public education in the United States, and offers solutions and the opportunity to be part of those solutions. I am very grateful to the musicians who are giving so generously of their time and talents for these shows, and for joining with the Participant Foundations to work for a better world.”

“T-Bone has joined with an amazing lineup of musical artists who believe music and arts education should be available to every student in America.” said Jim Berk, CEO of Participant Media and the Participant Foundation, “These two live events, inspired by Waiting for “Superman”, provide the chance for us to join together to insure that this occurs”

T Bone Burnett is a 10-time Grammy Award winner whose 40 years of experience in music and entertainment have earned him an unparalleled reputation as a first-rate innovative artist, songwriter, producer, performer, concert producer, record company owner and artists’ advocate.

Music pioneer Ralph Stanley and Burnett have collaborated numerous times over the past decade, including their studio work on the O Brother, Where Art Thou? soundtrack and Stanley’s performances on the Burnett-produced tours, Down From The Mountain and The Great High Mountain.

Neko Case has previously performed with T Bone onstage, and has recently participated in two projects produced by Burnett: Jakob Dylan’s most recent album, Women & Country, and the forthcoming soundtrack to Ghostbrothers Of Darkland County, a play with music written by Stephen King and John Mellencamp. Burnett has long been an admirer of Jim James from My Morning Jacket, and is looking forward to him joining the lineup for the New York show.

Burnett and Jeff Bridges collaborated on the film, Crazy Heart, which garnered numerous acting and music awards this year, including Oscars for both Bridges (Best Actor) and Burnett (Best Original song – with Ryan Bingham – for “The Weary Kind”).

The Secret Sisters self-titled debut album, set for an October 5 release, was Executive Produced by Burnett and is being released on his newly created Beladroit imprint through Universal/Republic Records.

Both Punch Brothers and Karen Elson are two relatively new artists that Burnett admires, and felt they would make great additions to The Speaking Clock Revue. Progressive string band Punch Brothers released their second album, Antifogmatic, on Nonesuch Records in June, while singer/songwriter Elson released her debut album, The Ghost Who Walks, on Third Man Records in May to great critical acclaim.

About Participant Media:
Participant Media is a Los Angeles-based entertainment company that focuses on socially relevant, commercially viable feature films, documentaries and television, as well as publishing, digital media, live events and music. Participant’s films include The Kite Runner, Charlie Wilson’s War, , An Inconvenient Truth, Good Night and Good Luck., The Visitor, The Soloist, Food, Inc., The Cove, The Informant!, The Crazies, Oceans, Countdown to Zero, Waiting for “Superman” and Fair Game. The Participant Foundation exists to support programs which support a sustainable and peaceful world. For more information, go to www.partricipantmedia.com.