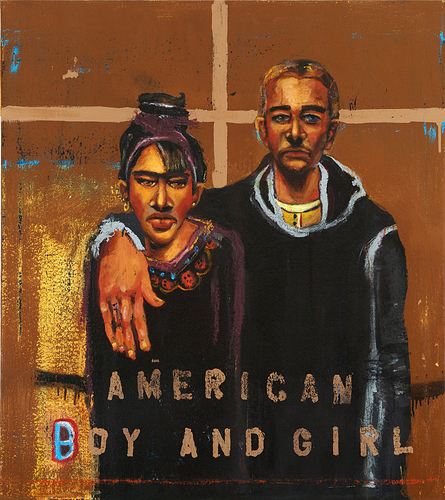 The Museum of Art— DeLand at 100 N. Woodland Blvd. in downtown DeLand on Friday, October 10, 2014. The exhibition will feature some 40 oil and mixed media paintings, which will remain on view at the Museum until December 28, 2014.

The multi-talented singer-songwriter, actor and humanitarian was inspired to paint by his artist mother at a young age growing up in Seymour, Indiana. In the early ’80s, he attended the Art Students League of New York and was inﬂuenced by, among others, German-Expressionists Otto Dix and Max Beckmann.

Mellencamp’s unbridled creativity enables him to aesthetically express hard-hitting truthful messages with distinctive perception. “John Mellencamp’s subject matter is of human existence painted as simply, starkly
and fully as he himself experienced it,” said Museum of Art—DeLand CEO George Bolge. “Art is not merely something he uses to clarify his position or to give point to his vision of life, it’s the very substance of who he is and what he wants to say.”

It is Mellencamp’s direct, frontal studies of humanity which people this exhibition. He is the kind of artist
that doesn’t sweep the dark side of life under the rug, but who pulls the rug back to see what lies hidden
underneath, and then tosses it aside to get to the business of cleaning it up. “I have a lot of opinions,” said
John Mellencamp, who was inducted into the Rock and Roll Hall of Fame in 2008. “This is what I think
and you don’t have to agree with me.”

In recent years, his paintings take on themes such as racism, war, faith and justice. “Mellencamp doesn’t
wince at grappling with issues of his heart, whether autobiographical or political,” wrote contributing
editor for ARTnews and New York Times Hilarie M. Sheets in the 2013-published catalogue The Paintings of
John Mellencamp. “He often paints in a free, more graffiti-like style, layering text and pictographic images
on canvases evocative of the frenetic street-art energy of work by Jean-Michel Basquiat.”

Mellencamp sees painting as simply another way to remain productive for then “I have something to
show for my time,” said the artist.

The Paintings of John Mellencamp at the Museum of Art—DeLand will be Mellencamp’s first art exhibition
in Florida. Visitors to Volusia County will be fortunate to have a unique opportunity to view an
exceptional soul-searching exhibition, which promises to equal the other numerous accomplishments of
this veteran entertainer.

Following the DeLand showing, the exhibition will travel to the Morris Museum of Art in Augusta,
Georgia, where it will be on view from January 11 through April 12, 2015. Recent exhibitions of the artist’s
work have been on view at the Butler Institute of American Art, in Youngstown, Ohio, and at the
Tennessee State Museum in Nashville, Tennessee.


More details are available at MoArtDeLand.org