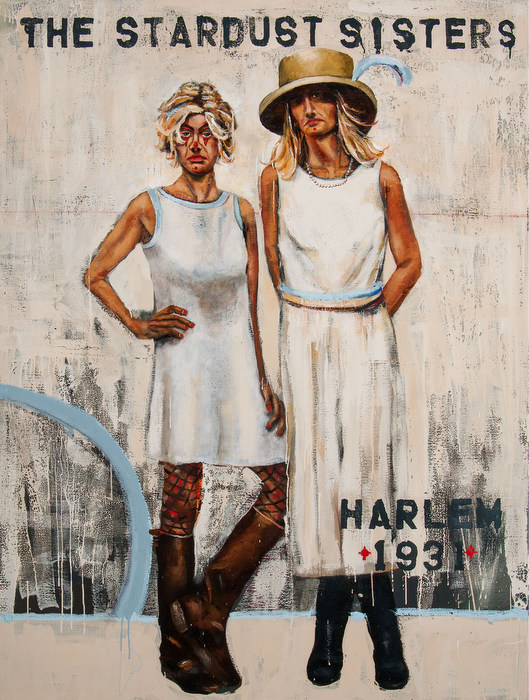 John Mellencamp, American rocker and Farm Aid founder, is still going strong. Few knew that he painted; yes, painted before he even started a band. In a rare convergence of artist and singer-songwriter, his mission to document America’s heart and soul shines from the 40-plus canvases now hanging in the downtown galleries of the Museum of Art DeLand (five more hang at the 600 North satellite location). These are serious, unsmiling faces, a new generation of Americans far from the carefree youth of “Jack and Diane,” his 1982 hit single. They reveal an unsettling, but still beautiful truth about self-identity in the 21st century.

Mellencamp, still boyish and jaunty at age 63, grants me a few minutes to discuss the paintings that complement the museum’s O Appalachia exhibit in its main institution. “My mother was an artist,” he explains. “I grew up with the smell of oil paint.” Pursuing first dance, then an art career in 1970s New York, he finally cranked up a rock band to make a living, but he has always painted. Today, compelled more than ever to brush paint onto canvas, Mellencamp is reflective.

“It’s a craving, you know,” he says of the need to create. Like any good folk artist, or folk singer, the common folk are his subject matter, rendered often in large, full-length portraits, staring at the viewer with rebellious, confrontational mien. “Some of these take 10, 15 years,” he says, strolling past a painting titled /p>

“Skeletons.” In the center, an African-American man sits, looking nervous in his caramel suit, surrounded by faces. “This face,” says Mellencamp, pointing to a luminous, ghostly head, “I did about 10 years ago, ripped it off the old canvas and stuck it in the upper right-hand corner. That face,” he points to a vigorously colorful image of a guy with a cigarette, “I did five years ago. It needed to go here.” It did, and it works.

And so his paintings build up over the time between tours. He distorts the bodies, sometimes the eyes and other features, to intensify a sense of otherness, a feeling of stoic solitude. Fascinated with the everyman, Mellencamp has developed a sophisticated folk-art style that’s rough and informal, yet carries a beauty and balance – what he calls the “math” of the painting, borrowing from his musical background.

“My studio is where I get away from all of the crowds, the press and the business to be alone, by myself,” he confesses. Mellencamp’s songs celebrate populist, working-class values, and his subjects – some famous, some not – reflect his focus on the American character. It’s “Lonesome Roads,” a monochromatic dude with a sporty blue bolo tie; it’s the simmering stare of an African-American “Man From Atlanta”; it’s a self-portrait posing as both Cain and Abel, scrawled in blue as “Quayin and Hevel.”

His colors and textures are accessible but luminous, and like his songs, his paintings boil things down to the essential. But missing from these faces is any hint of free spirit. The raucous glee of songs like “Little Pink Houses” is gone, and a few subjects are downright angry and screaming. Mellencamp, whether he’s documenting America or documenting himself documenting America, seems to be sending us a message.

“Neil [Young], Willie [Nelson] and I have been doing Farm Aid for years,” Mellencamp drawls, “to raise money to help farmers keep their land. After a lot of concerts, we all compared notes backstage, and we came to a simple conclusion: It’s getting worse out there.”

This isn’t, perhaps, what anyone wants to hear in our escapist postindustrial culture, but it’s a fair assessment of the situation. Out there beyond the edge of the city’s cosmopolitan triumph, the countenance of the working man is still beautiful, but his smile has faded. See it at the Museum of Art DeLand, if you dare.