John's 2012 Canadian No Better Than This Tour has been announced! John and the band head out for a cross Canada trek, from west to east, over the course of five weeks starting mid June. The tour starts in British Columbia and continues east, including concert performances in Alberta, Saskatchewan, Ontario, Prince Edward Island, New Brunswick, Nova Scotia and Newfoundland. Mellencamp will be joined by Canada's own Cowboy Junkies who are his special guests for this run of dates. 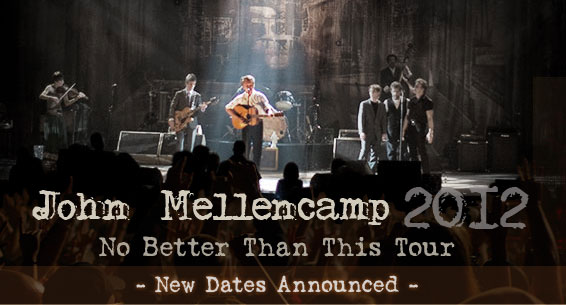 OFFICIAL PRESS RELEASE:
John Mellencamp, named "the poet laureate of the interstate" by Cam Fuller writing for The Saskatoon Star Phoenix, brings his No Better Than This Tour for a cross Canada trek, from west to east, over the course of five weeks starting mid June. The tour starts in British Columbia and continues east, including concert performances in Alberta, Saskatchewan, Ontario, Prince Edward Island, New Brunswick, Nova Scotia and Newfoundland.

Over the course of the past two years, the tour has crisscrossed the United States, played dates in Ireland, England, Germany, France, Netherlands, Denmark, Switzerland and Italy. Last year the tour played twelve Canadian dates, that trek notable for both enthusiastic audience response and capacity crowds. The new dates are a reflection of the success of that earlier leg of the tour. His long-time touring band including Michael Wanchic (guitar), Andy York (guitar), Miriam Sturm (violin), John Gunnell (electric and upright bass), Dane Clark (drums and percussion) and Troye Kinnett (accordion/keyboards) will be on hand for the upcoming NBTT Canada dates.

Mellencamp will be joined by Canada’s own Cowboy Junkies who are his special guests for this run of dates. The band, since its formation in Toronto in 1985, has been a leading light on the indie scene and brings its signature introspective, quiet intensity to the No Better Than This Tour for the first time this summer.

The show Mellencamp is bringing to Canada in June and July will include repertoire reflective of his entire career as well as music from No Better Than This, his recent critically acclaimed album that was produced by T Bone Burnett and recorded at Sun Studio in Memphis where Elvis Presley, Howlin' Wolf, Johnny Cash and many others originally recorded as well as in Room 414 of San Antonio's Gunter Hotel where Robert Johnson recorded in 1936 and in Savannah, Georgia's historic First African Baptist Church, a stop on the "underground railroad" for runaway slaves. All of the sessions were documented on a 55-year-old mono tape recorder using just one vintage microphone at each location. Similarly, The Cowboy Junkies debut album, The Trinity Sessions, was recorded using a single microphone at Toronto’s Church of the Holy Trinity.

As was the case with its album namesake, No Better Than This concerts have been the subject of an impressive number of laudatory reviews. A selection of excerpts from those follows:

"Mellencamp's goal in reconfiguring these songs was clear: to establish that underneath the pop-radio polish lurked deep truths about American life... he went about his business without abandoning his natural animal magnetism, Mellencamp succeeded." - Los Angeles Times

"Mellencamp gloriously proved that not only is he one of America's treasures, an incredible singer-songwriter and guitarist, he's also a master at putting together a set." - Dallas Morning News:

"..a concert that seesawed between facing mortality — full of songs about death — and a stubborn determination to live fully." - New York Times

"..he maintains remarkable vocal strength. It's an instrument that's perfectly suited to a catalogue of songs that aim to provide a voice to a cast of uncelebrated working-class figures." - Richmond Times-Dispatch

"His voice, grainy and loaded with gravitas, remains as compelling and as affective as it was the day he recorded ‘Pink Houses' in 1983. It's a voice that's as distinctive as any of his arguably more famous peers, from Dylan to Springsteen to Petty, and like those artists, it's attached to a man who has kept integrity high on his priority list. Johnny Cash once referred to him as one of the ten best songwriters, and Mellencamp's newer material didn't disappoint in a live setting." - American Songwriter

"..it was a generous show, giving the fans what they wanted, but also allowing the leader to indulge in a more old-school style. - St Paul Pioneer Press

"This concert was superb from beginning to end, with Mellencamp and his crack band taking a stripped down, neo-folk approach until the last quarter, when he unleashed his rock 'n' roll persona. I'm loath to call anything the best, but if I have to choose, this was the concert of the year in Pittsburgh." - Pittsburgh Tribune 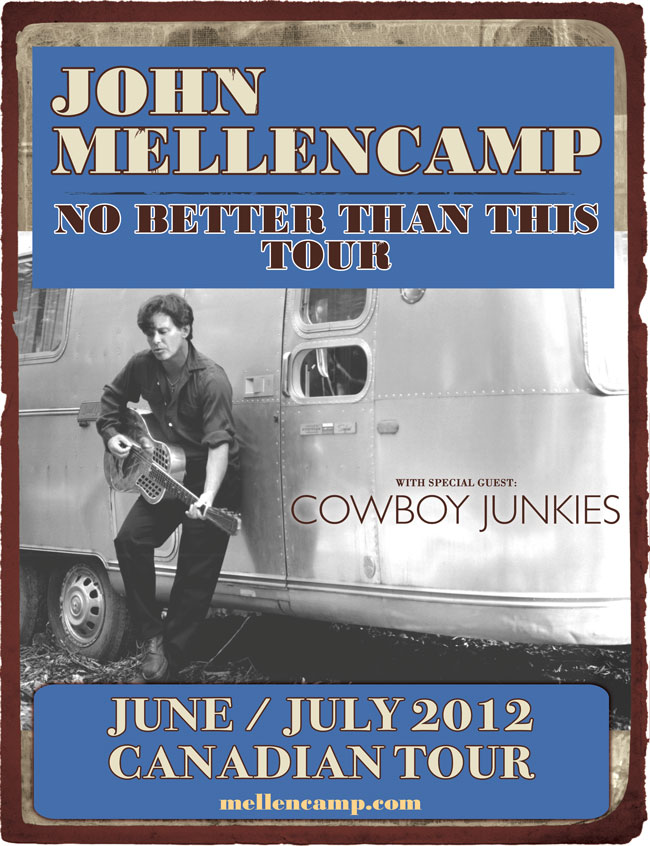 John Mellencamp No Better Than This Canadian 2012 Tour
Tour Tickets on sale Friday, March 30 at 10 AM except as indicated 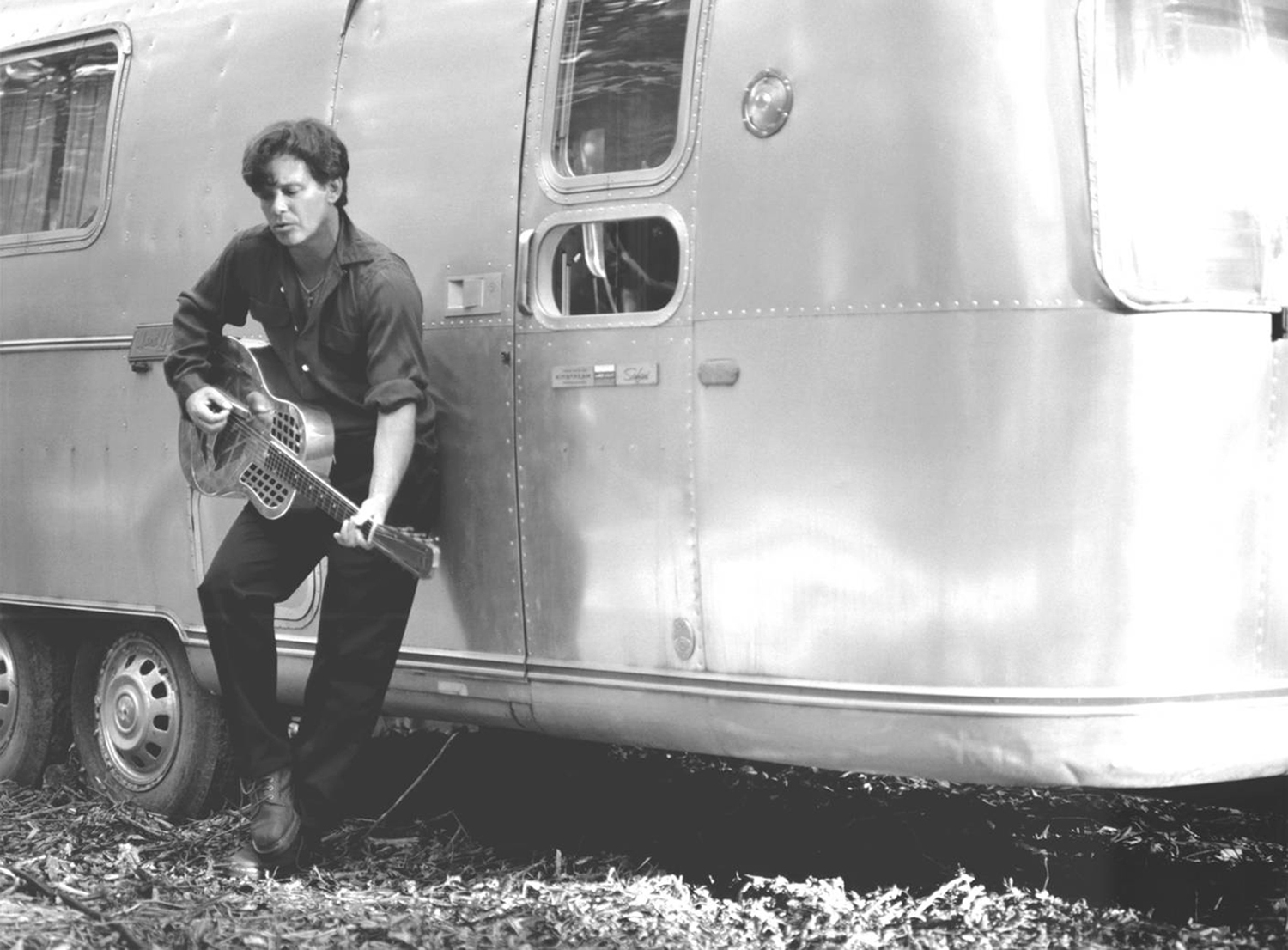