OFFICIAL PRESS RELEASE: BLOOMINGTON, IN– August 9, 2010 – John Mellencamp and his band are set to embark on the first leg of the No Better Than This Tour in late October following the August 17th release of his Rounder Records debut album, No Better Than This. The tour, designed as a uniquely formatted “evening with,” brings Mellencamp’s music to theater-sized venues, a rare opportunity to experience one of America’s most iconic songwriters and performers in an intimate setting, highlighting all phases of his artistry.

The tour, anticipated to continue through the Spring of 2011, will kick off on October 29th in Bloomington, IN, where Mellencamp and his family make their home. It continues for four weeks bringing Mellencamp, his band and music to audiences in Nashville, Cincinnati, St. Louis, Kansas City, Chicago, Minneapolis, Cleveland, Detroit, Pittsburgh, and three additional Indiana markets of South Bend, Fort Wayne and Indianapolis with further tour dates pending.

The tour will feature classic Mellencamp material associated with the Rock and Roll Hall of Fame inductee over the course of his 35-year-long career as well as the new music from No Better Than This. The new album was produced by T Bone Burnett and recorded in three historic locations in the American South: Savannah’s First African Baptist Church, Sun Studio in Memphis and Room 414 of San Antonio’s Gunter Hotel where Robert Johnson recorded in 1936. The sessions were documented on a 55-year-old mono tape recorder using just one vintage microphone at each location. Rolling Stone’s review of the album noted, “Mellencamp has never sounded looser or easier on a record,” suggesting the artist was “channeling spirits and stepping into period styles. They fit him perfectly."

As a reflection of the diversity of styles and material that have been a hallmark of Mellencamp’s eclectic career, the concerts are formatted into three segments. These showcase John Mellencamp in an acoustic context, fronting a small combo recalling blues/country and rockabilly roots and with his full rock band. Musicians backing Mellencamp include Michael Wanchic (guitar), Andy York (guitar), Miriam Sturm (violin), John Gunnell (electric and upright bass), Dane Clark (drums), and Troye Kinnett (accordion/keyboards).

Of special note is the fact that the tour’s “opening act,” is a documentary film by Kurt Markus entitled It’s About You. Shot on Super8 film over the course of last year’s Bob Dylan-John Mellencamp-Willie Nelson tour of minor league baseball stadiums, it chronicles the creation of No Better Than This while serving as a cinematic ‘think piece’ on the state of the country at the end of the first decade of the 21st Century. Markus, whose still work has put him in the front ranks of contemporary American photographers, has been cited for his extraordinary vision for his work documenting the American West and is the recipient of Life Magazine’s Alfred Eisenstaedt Photography Award. Ticket holders are urged to get to their respective No Better Than This Tour venues in advance of the film’s 6:45 PM start time.

Mellencamp noted, “I’m very excited to have the opportunity at this time in my life to go on tour and present these songs in this manner.”

Fans should log on to www.mellencamp.com for the most up-to-date concert and ticket on-sale information. 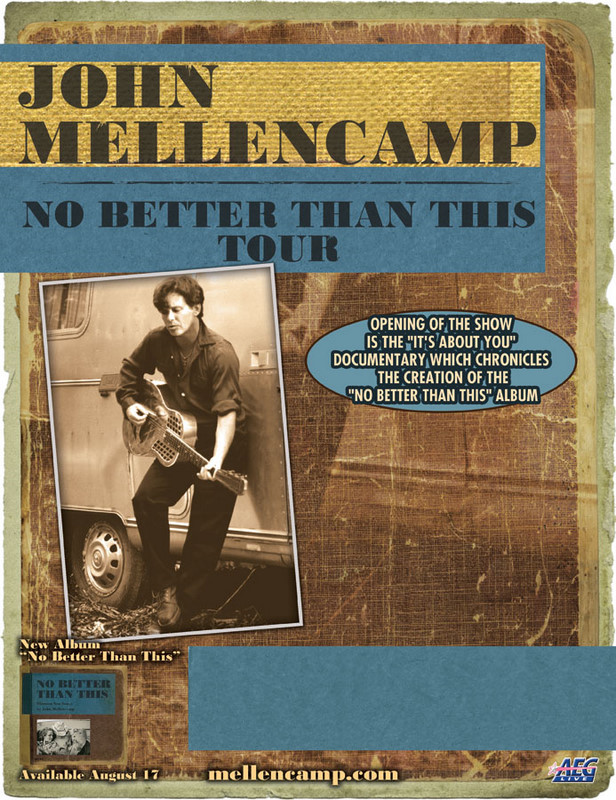 Public tickets on sale Saturday, August 14 at 10 AM local venue time, except as noted.

About John Mellencamp
John Mellencamp’s career in music has spanned more than 35 years during which time he transitioned from pre-fab pop idol to one of the most highly regarded mature songwriters of a generation.

Mellencamp fell in love with music at an early age and was fronting a soul band in his native Indiana by the time he was 14. He would go on to release 26 albums with domestic sales exceeding 40 million units. He has been nominated for 13 Grammys, was recipient of Billboard’s Century Award, ASCAP Foundation’s Champion Award, The Woody Guthrie Award, Q’s Classic Songwriter Award and was inducted into the Rock and Roll Hall of Fame. Mellencamp has amassed 22 Top 40 hits and holds the record for the most tracks by a solo artist to hit #1 on the Hot Mainstream Rock Tracks Chart. The social activism that is reflected in his songs was one of the key catalysts that launched Farm Aid, the concert series and organization that has addressed the struggle of American family farmers for more than 25 years. The unique instrumentation of his band and overall approach is widely credited with being the forbear of the Americana/No Depression genre of rural-inflected music.

Mellencamp is an accomplished painter whose work has been the focus of several one-man gallery exhibitions as well as a joint showing with Miles Davis. He has been working, in collaboration with Stephen King, on play with music entitled Ghost Brothers of Darkland County that will be directed for the stage by Liv Ulmann.

On break days during his 2009 national tour with Bob Dylan and Willie Nelson, he recorded No Better Than This, produced by T Bone Burnett and released by Rounder Records.