By Paul Polycarpou with Deborah Walden / Photography by Jerry Atnip - Nashville Arts Magazine
The image on the cover of the Magazine is John's painting "Wanted" which is part of the show.
To view a slide show of the complete article (pages 22 -27) and view some of the new painting that will be on exhibit please click HERE.

Its a good six hour drive from Nashville to Bloomington, Indiana. That's with skies and the proverbial tail wind at the stern. Unfortunately, on this particular day we had neither. Blinding rain followed us up I-65 into gridlocked traffic in Louisville, at which pint it decided to change direction and come at us sideways. But what did  I care. I was en route to meet with one of my favorites artists. A man whose art book has pride of place on my coffee table and whose portraits feel like old friends to me. Yes, I know every one of these crazy characters by heart. For me this was akin to hanging with Hogarth, visiting with Van Gogh, chilling with Caravaggio. In other words, about as good as it gets.

Behind the chain-link fence is the studio, a vast, beautifully decorated space. the light hits the bare wood floor and the cracker leather chairs just right. Perfect rows of paint cans line the shelves; clean brushes in vases stand at the ready. Everything perfectly placed, everything balanced.

John Mellencamp is exactly what you expect. Nothing precious or pretentious here. A  straightforward kind of guy who could've ridden the trains cross-country with Woody Guthrie or stood in line at the work camps, hunger in his eyes, shuffling his feet, hand-rolling cigarettes. the kind of guy who puts up his dukes to defend the family name. I like this guy, and I like his art even more.

He's a lot more cordial in person than I expected. Friendly, present in the moment. I quickly get the sense that small talk is not his strong suit, and that suits me just fine. He asks if I mind if he smokes.

What followed was an honest, down-to-earth conversation with one of the world's great performers. A master songwriter/storyteller whose catalog of work has introduced us to Jack and Diane and the Pink Houses they live in. Whose efforts to save the family farm touched deep into the lives of millions and made a significant impact on the history of this country. This is not a man who spends his time in pursuit of the trivial.

The room filled with clouds of blue smoke. I took a big breath... 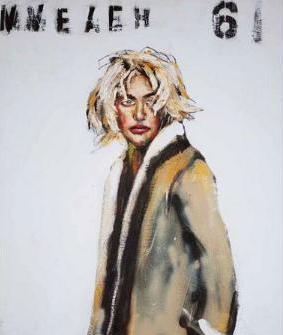 You started painting at a very early age. What triggered that? what got you started?

My mother painted. She painted landscapes and flowers, all that kind of stuff. But with five kids it would take her forever to finish a painting because she could only paint for fifteen minutes at a time. So I grew up thinking that oil paintings took forever to complete.

So when did you start putting paint on the canvas?

I started messing around with oil paints when I was about 10 but, you know, without instruction. Just drawing pictures of naked girls and things like that. I didn't have any outside influence. It was the '50's and we weren't encourage to look too far out the backyard.

You were going on feel, purely by instinct.

Well, I could always draw. Nothing serious, but I knew I could always do it. If I wanted a poster I would just grab a piece of construction paper and draw it myself. Let's say I wanted a picture of Dylan for my wall - I would draw it as opposed to going out and spending $5 to buy it.

I see traces of the Old Masters in your work. Have you ever had formal art training?

I studied for one week at the New York Art League with a guy names David Leffel. there was so much information from this guy that I'm still trying to learn and put into practice what he taught me.

Like painting dark to light. You have to do that or you're not going to get the results you want.

Did you consciously study the Old Masters' techniques?

Yes, I did. And at the same time I became almost an art historian. I discovered German art; I discovered New York turn of the century, Walt Kuhn, all those guys.  I looked around a lot until I found what I liked, and then when I looked at a painting it's like, how did he do this?

You want to know how did this happen...

Exactly! How did this happen? How does the background work? How does it not work? How does the math work? As much as I hate to admin it, math is very important in everything, in music and in painting. If your math is incorrect you're not going to get the results you're looking for.

Can you give me an example of that?

Sure. I know that in that painting (points to Deportie still on his easel) the right shoulder is bigger than the other shoulder. I can see that. but it's offset by the fact that the belt is wider on the left side, and it balances it out. The math works. I'm not saying you can't make a beautiful painting without math or without certain rules, but I couldn't get the results I do without following them. Just like in society. If you don't have any rules you get what we have on Wall Street.

Everyone in your paintings look like you, but no one ever smiles.

They're all me in one shape or another. They're all just paintings of me. I don't try to make it look like anybody. I don't use models. I just look at myself.

No, sorry man, they're not in it. I'm painting because I have to. It has nothing to do with them. And when I'm satisfied with it, I'm on to the next one. I'm going to paint, and whatever anyone says is not going to deter me from doing it. People have written wonderful things about me, and people have written terrible things. I would like to say it's great, but that's not going to happen.

Because people go into galleries and recording studios with good ears and bad eyes and bad ears and good eyes. they carry themselves into it.

They're bringing their own baggage to your art?

Listen, I understand how that conversation goes. "I never really liked that, Mellencamp guy and now he thinks he's a painter." I get that. I do the same thing. I'm human. I'm like, what is this actor doing with a guitar in his hand; he can't even act. I totally understand, but at the end of the day it doesn't matter to me.

I look at someone like Max Beckman, and there's so much going on. So much abandon, such beauty. Same with Chaim Soutine.

And people who know nothing about art say, "I could've done that," but the point is, they didn't. It's like someone walking up to me and going, "Hey, I could've written 'Pink House' but you know - they didn't. I did. Same with my paintings.

In your new work, there's a lot of text on the canvas. Messages, thoughts tied to ideas. Are you trying to make bigger statements here?

I'm just trying to work street art into my paintings. But I think, even more than that, as an artist it kind of says I'm an adult. I've grown up, and I don't need to lie to myself about who I am or what I'm doing.

Are you saying that your attitude towards your art has changed?

Look, I'm a hypocrite. You're looking at one. But at the same time, being a hypocrite means that you've changed, and you have a different opinion of something. Wouldn't it be terrible if we all had the same opinion that we had when we were 18 years old of what the world was supposed to be and how men and women were supposed to to act. Want to see a hypocrite, look in the mirror sometime.

Do you sketch out first, or do you go straight to the paint?

The way you apply the paint is courageous. It's very strong.

I'm not precious. If I have to struggle with something too much, I'm not going to do it. Sometimes I've written songs or finished paintings and I looked up and went, "Thank you! Thanks for that." Because I really didn't have much to do with it. It just comes through me. So many people are caught up in trying to make a likeness of something, and I just don't understand that. If you want a perfect likeness, take a picture. You gotta bring something of yourself.

Are you happy with what you've accomplished so far?

No, for me it's the act of doing. The sense of accomplishment is zero. My girlfriend said to me, aren't you just a bit proud , and I said of what, of something that I gotta do?