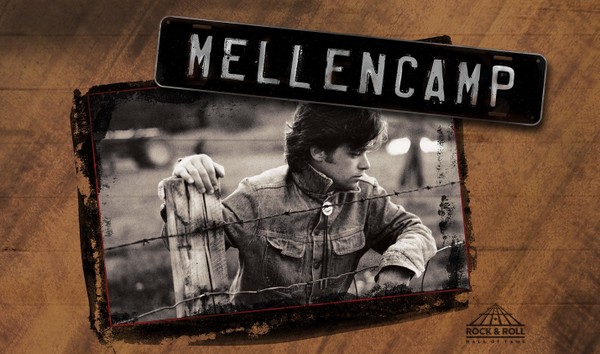 Fans will experience the many sides of the rock icon - as a painter, champion for farmers and Rock & Roll Hall of Fame Inductee

The Rock & Roll Hall of Fame presents a special exhibit on the life, art and music of John Mellencamp. Opening November 10, 2016 in the Ahmet Ertegun Main Exhibition Hall, MELLENCAMP tells story of a complex artist who forged his own path – transforming from manager-named “Johnny Cougar” to self-possessed John Mellencamp, a music and visual artist, a champion of heartland values, and an advocate for American farmers.

The exhibit is comprised mainly of artifacts from Mellencamp’s personal collection. Among the over 100 items on display include:
• His 1966 Silver Honda Scrambler 305 motorcycle
• Personal photographs and ephemera
• Original handwritten lyrics to “Small Town,” “R.O.C.K. in the U.S.A.,” “Cherry Bomb,” “Pop Singer,” and "Longest Days"  (“Life is Short”)
• Mellencamp’s main Dove acoustic guitar used in his songwriting sessions and live performances from the 70s through 90s.
• Items related to the recording of his most successful song “Jack & Diane”
• Performance outfits
• Six of his original paintings
• Selections from an exclusive multi-hour interview with Mellencamp done specifically for the exhibition

“John Mellencamp is one of rock and roll’s most enduring artists,” said Greg Harris, President and CEO of the Rock Hall. “His authenticity and ability to tell stories that resonate with multiple generations of fans is a testament to his art.”

“In working closely with John Mellencamp to create this exhibit, it was very clear that he embodies what rock and roll is all about – rebellion, being true to yourself, and of course, making great music,” says Karen Herman, Vice President of Collections & Curatorial Affairs at the Rock & Roll Hall of Fame. “Not many people know that he’s an accomplished painter, and it was important to bring that element in. Fans can truly see that he’s embraced the life of a true and complex artist.”

“I would like this exhibit to let people know, or discover, that I really have spent my entire life living the way that I want to live, and doing what I want to do,” Mellencamp says. “And, that I consider myself the luckiest guy in the world for being able to do that.”

Mellencamp was inducted into the Rock & Roll Hall of Fame in 2008, alongside the Dave Clark Give, Leonard Cohen, Kenny Gamble and Leon Huff, Little Walter, Madonna, and the Ventures. As a co-founder of Farm Aid, he has helped give a voice and raise money for dispossessed farm families. He continues to tour and impact the musical landscape, and his influence is shown through today’s artists like Jason Aldean, Zac Brown & Keith Urban.

ABOUT THE ROCK HALL
Rock Connects Us. Our mission is clear and simple: To engage, teach and inspire through the power of rock and roll. We share stories of the people, events and songs that shape our world through exhibits, innovative programs and concerts. Join the millions of other people who love it as much as you do. It’s a celebration of fans like you. Experience it live or online – Visitrockhall.com or follow us on Facebook, Twitter (@rock_hall) and Instagram (@rockhall). Long Live Rock!