John Mellencamp announced dates for his upcoming Plain Spoken tour beginning in January 2015 throughout the summer. “The Voice of the Heartland” will play 80 shows including multiple dates in the artist’s hometown of Bloomington, Indiana; Nashville, Chicago, Minneapolis, New York, and more. The special guest is Carlene Carter. The tour, produced by AEG Live, will kick off on January 21st in South Bend, Indiana at the Morris Performing Arts Center. A portion of the ticket proceeds from the final performance held in Indianapolis at the Bankers Life Fieldhouse on August 4th will be donated to the Riley Children’s Foundation, which supports Riley Hospital for Children (rileykids.org).

All shows will go on sale Friday, September 19th at 10:00AM (except New York shows which go on sale at 11:00AM). All are local time. Tickets available at johnmellencamp.com and axs.com. (Tour dates listed below)

On September 23rd, Rock & Roll Hall of Famer John Mellencamp will release one of the most distinguished records of his career, Plain Spoken on Republic Records. Plain Spoken includes ten stunningly elegant and soul-searching Americana gems.

“The music looks back toward … ‘Blood On The Tracks,’ with strummed guitars, brushes on the drums and neck-rack harmonica, and the words ponder trouble, power, love, God, freedom and mortality.” says THE NEW YORK TIMES. Plain Spoken is set to be hailed as an unparalleled new chapter in Mellencamp’s distinctive songbook.

Concert goers will receive a digital download of the Plain Spoken record with purchase of tickets to the tour (One download code per ticket for online and phone purchases only; does not apply to box office or outlet ticket purchases.)

Grammy-winning musician John Mellencamp has touched the heart and souls of music listeners and influenced American Culture with enduring songs, he is also one of the most successful live concert performers in the world. A man with a conscience, he used his visibility and influence to advocate an issue that hit close to home and became one of the founding members of Farm Aid, an organization that began in 1985 to raise awareness about the loss of family farms. The Farm Aid concerts have raised over $45 million to promote a resilient family farm system of agriculture.

In 2014, he also signed an historic "lifetime recording contract" with Republic Records for the release of Plain Spoken and all of his albums to follow. Universal Music Enterprises continues to represent the artist's prominent catalog as well. Mercury/UME recently released his latest live album, John Mellencamp Sings Trouble No More Live at Town Hall, this past summer.

John's special guest on the 2015 Plain Spoken Tour is Carlene Carter. Read more about Carlene and watch some of her videos HERE

SEE ALL OF THE TOUR DATES ON MELLENCAMP.COM 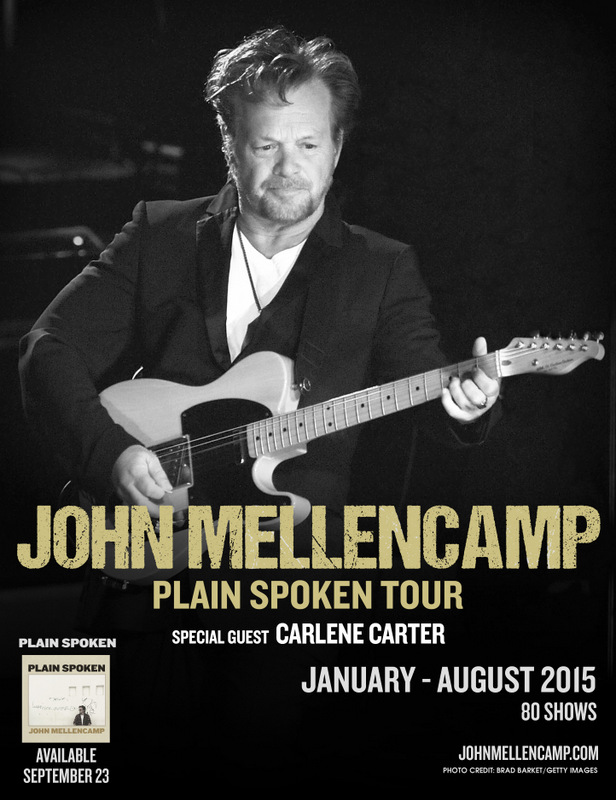