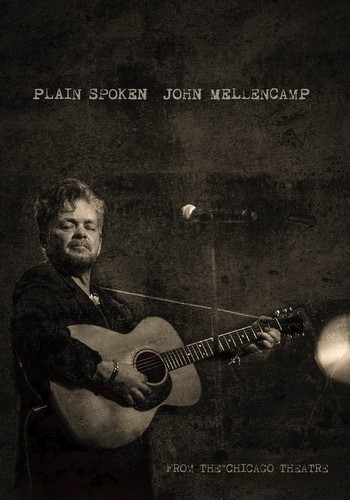 John Mellencamp’s self-narrated musical odyssey, Plain Spoken: From The Chicago Theatre surpasses the confines of a concert film or documentary – it’s a portrait of one of music’s most celebrated songwriters. The cinematic film presents John Mellencamp, with his full band, performing at the landmark Chicago Theater on October 25, 2016,  just 250 miles to his home in Bloomington, IN.  The footage, serving as an undercurrent to his story, is blanketed with highly personal voice-overs from the man himself on his Midwestern upbringing, career, and his outlook on life. It’s more than watching John Mellencamp live – it’s experiencing John Mellencamp.

With special guest Carlene Carter adding to the set, Plain Spoken: From The Chicago Theatre presents live versions of John Mellencamp’s cherished songs, as well as taking viewers on an intimate and personalized journey.

To date, Mellencamp has been inducted to the Rock and Roll Hall of Fame® in 2008 and recently nominated for The Songwriters Hall of Fame. In addition, he co-founded Farm Aid in 1985, which went on to raise over $50 million to support family farms nationwide by 2017. One of the most successful live concert performers in the world, John is also a recipient of the John Steinbeck Award, ASCAP Foundation’s Champion Award, The Woody Guthrie Award, Billboard Century Award, Americana Music Association's Lifetime Achievement Award, and the Founders Award, the top honor assigned by ASCAP, the American Society of Composers, Authors and Publishers.
In addition to critical acclaim, Mellencamp has landed a total of 22 Top 40 hits in addition to earning the record for the “most #1 tracks by a solo artist on the Hot Mainstream Rock Tracks” chart. Recently, his 23rd full-length album Sad Clowns & Hillbillies featuring Carlene Carter -bowed at #1 on the Billboard Top American Albums Chart, #3 on the Top Rock Albums Chart (his best entry in a decade), and #5 on the Top Albums Chart. In addition, it became his fifth consecutive Top 20 album.

ABOUT JOHN MELLENCAMP
John Mellencamp’s career in music, spanning more than 35 years, has seen him transition from pop star to one of the most highly respected singer/songwriters of a generation. Mellencamp is incredibly acclaimed; a recent nominee to the Songwriters Hall of Fame, he is also member of the Rock and Roll Hall of Fame, Grammy winner for “Best Male Rock Vocal Performance” in 1982 with 13 Grammy nominations to date, a recipient of the John Steinbeck Award, ASCAP Foundation’s Champion Award, The Woody Guthrie Award and Americana Music Association's Lifetime Achievement Award and more recently, the Founders Award, the top honor assigned by the American Society of Composers, Authors and Publishers. He is also one of the most successful live concert performers in the world. The social activism reflected in his songs helped catalyze Farm Aid, the concert series and organization that has addressed the struggle of American family farmers for more than 25 years. John Mellencamp’s upcoming full-length album, Sad Clowns & Hillbillies, featuring Carlene Carter, is his 23rd over the course of a remarkable career. Released on April 28, 2017 followed by a summer tour in major cities across the country. Sad Clowns & Hillbillies returns Mellencamp to the musical eclecticism that is, itself, a reflection of his wide-ranging musings on life and showcases a poet who has wisely used the years between youth and the present day to become an absolute master of songwriting and interpretation. That passion and experience resonates most beautifully in this showcase of his music. John also wrote the title song for the upcoming film, The Yellow Birds.

John continues to focus on another facet of his artistic expression: painting. His style has progressed over the years as evidenced by several gallery shows and published portfolios, and in recent years he has increased his output by completing over 100 new works. His pieces were shown in 2012 at the Tennessee State Museum in Nashville under the under the title “Nothing Like I Planned: The Art Of John Mellencamp” and, more recently at the Butler Institute of American Art in an exhibition entitled “The Paintings Of John Mellencamp.” “The Paintings of John Mellencamp” traveled to the Museum of Art-DeLand, Florida and John’s art was showcased at the ACA Gallery in New York. The unique instrumentation of his band and his poignant songs about everyday life in the American heartland, are widely credited with being the forbearer of the Americana/No Depression genre of rural-inflected music. An extraordinary collaboration performed by an ensemble cast of 15 actors and a four-piece live band, comprised of members of John Mellencamp’s band is The Ghost Brothers of Darkland County, a musical with music and lyrics by John Mellencamp, a libretto by author Stephen King and production by T Bone Burnett. Mellencamp continues his journey as the walking embodiment of heartland rock; passionate, plain-spoken, and a self-proclaimed rebel.