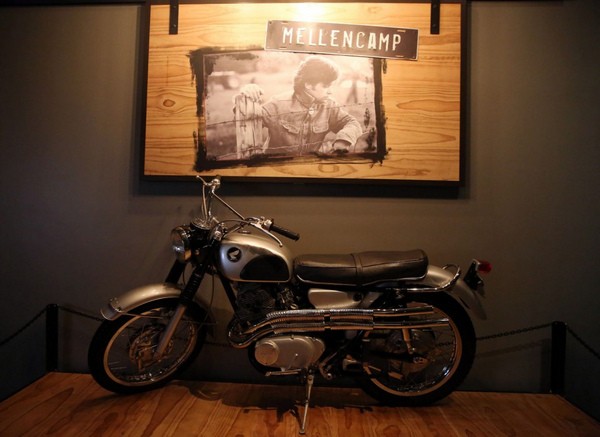 But perhaps not in the 20-year history of the museum has there been a more appropriate display to open within two days of Donald Trump's historic – and for some, shattering – victory in the presidential race.

More than 2,000 square feet of space featuring in excess of 100 items pay homage to the man who chose – after deciding to abandon the "Johnny Cougar'' name foisted on him by manager Tom DiFries – to pave his own road.

And in so doing, the infant who survived an operation to correct his life-threatening spina bifida birth defect became the jongleur of the Heartland. As author John Steinbeck's son Thomas said in a speech when Mellencamp was named the 2012 Steinbeck Award winner:

"He has spent his life serving as a voice for the people.''

He did so by following his own path, one that the exhibit curated by the museum's Karen Herman, vice president of collections and curatorial affairs, perfectly chronicles from his birth in rural Seymour, Indiana, in 1951, to the present day.

As usual with exhibitions under Herman's hand, this one is heavy on interaction, including iPads that let visitors hear descriptions of the various artifacts, stunning and in-depth interviews with Mellencamp, and, of course, the music that put him in the Rock & Roll Hall of Fame as a member of the Class of 2008.

But as those digital tricks and trades are the new gimmicks at the Rock Hall – and obviously designed to draw in younger fans – it's the "things'' here that put on display the reality that the notoriously reticent Mellencamp is so much more than a singer-songwriter.

Foremost among them are six massive paintings – in one of the accompanying signs, Mellencamp noted that he considers himself a visual artist first, as inspired by his painter-mother. He says he grew up around the smells of oil paint and canvas.

The images are as stark as his songs, with little wasted color, and created with sparse but bold brush strokes that are just as haunting as his lyrics. A painting called "The Stardust Sisters'' shows his former girlfriend, Meg Ryan, and her best friend, fellow actress Laura Dern, as 1930s clowns. They're not the funny Ringling Bros. clowns of childhood, nor are they the Emmett Kelly sad tramps that make us smile through tears. No, they're clowns as a German Expressionist might have painted them, dark and infinitely more frightening than Stephen King's "It'' clowns.

An equally gloomy and massive painting called "The Gates of Hell'' has been compared to Grant Wood's iconic "American Gothic,'' but this is no simple image of a farmer and his wife. No, this is a pair of satanic figures and the dogs that legendarily guard the entry to Hades, and is described as "a brutal allegory for emotional torture,'' triggered as it was by a bitter divorce he was going through when he created it in 1992.

Perhaps most frightening – and disconcerting – is a painting called simply "Martin Luther King.'' It channels graffiti street art, but the image of King, which really looks nothing like him, is shocking: wild eyes staring in dismay, and a mouth that seems to sob in sorrow. The words emblazoned across the portrait tell why: "Martin Luther King had a dream / And this ain't it.''

The exhibit has the usual "things'' fare – a favorite is a hand-written set list from the late Plain Dealer rock critic Jane Scott of his 1985 concert at Richfield taken from her reporter's notebook. Too, there are his first motorcycle, guitars, his first royalty check ($27.59, dated Dec. 16, 1977), hand-written lyrics for "Jack & Diane'' and "Small Town'' (complete with a misspelled "And that's where they'll probably berry me'' that gives credence to a second-grade report card noting his troubles with spelling), posters and a Neil Young guitar from the first Farm Aid.

The magazine covers, the famous leather jacket, the press kits, even a pair of shoes show the items, the tangibles, that are Mellencamp.

But it's the paintings, including a harrowing self-portrait from 1991 called "Under the Light,'' that capture the psyche of John Mellencamp, an iconoclastic creator determined to do things his way, or not do them at all.

And that is the triumph of this exhibit. 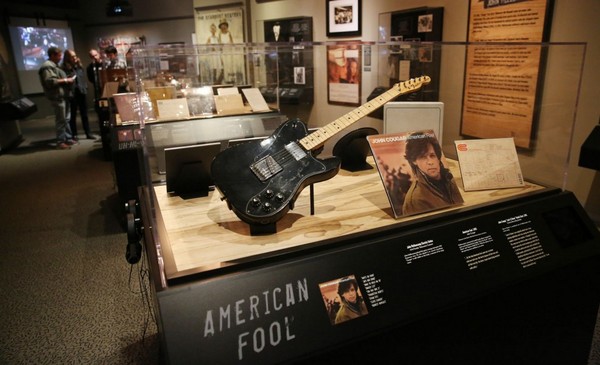 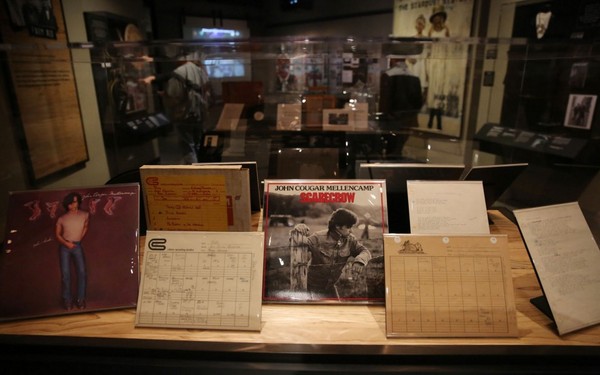