John Mellencamp’s Nothing Like I Planned, featured at the Tennessee State Museum through June, seems to voice and then blend two distinct personalities through paint: massive social commentary works that pop with notation, symbolism, and narrative, in counterpoint with the more reserved but no less expressive hand behind his intimate and obsessive portraiture series.

Mellencamp’s social commentary pieces are strong and vibrant, recalling images from the Great Depression but depicted with dynamic, almost furious interpretations channeling the color and stroke of German Expressionists. Coast to Coast (2005), a large mixed media mural abstracting the US into an interwoven collage of scenes and symbols, doesn’t hold back its scathing commentary of the country. Coast to Coast exists as a time capsule of 2005. Seen now, years after events have occurred, it’s easy to be jaded towards what are now common allegorical references — Hollywood’s buxom figure dominating the Californian landscaped lifestyle, or Louisiana blanked out into an olive rectangle with “FEMA” written in army stencils — but much harder to face the unsolved, taboo issues, such as the provocative image of the Ohio Valley as an American Gothic hooked on methamphetamine. By facing us with the problems experienced then, it leaves us to ask ourselves which issues we’ve really managed to solve, relevant and bold in more ways than just paint. 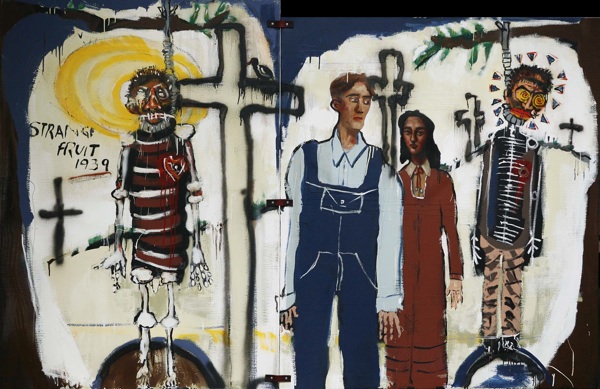 Facing uncomfortable truths is one of Mellencamp’s strong points throughout this series. Strange Fruit (2006) also pairs two mangled skeletal figures with a male and female, wholesome but somehow blank and stoic in their Steinbeckian overalls and prairie dress when compared to their companions. Against the lynched figures, whose bodies and faces are so brutalized by the brush as to strip them – literally and figuratively – of their humanity, the anxious observation present in the couple render a kind of horror in the viewer that echoes Billie Holiday’s relationship with her own Strange Fruit, the haunting song by the same name. 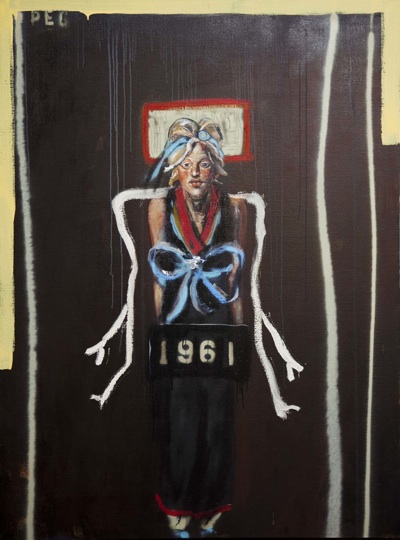 If the commentary works are an emotive shout, Mellencamp’s portraits are an intimate whisper. Playing with both background and foreground within the works, figures are often compressed by the paint used to color the backgrounds, creating a psychological ground for the figure to exist within. In most images, such as Peg (2012), though the majority of the painting is loose and tending towards a dismissal of form through stylized touches, there’s an intriguing fixation on the face through brushstrokes and layers that hold the eye. 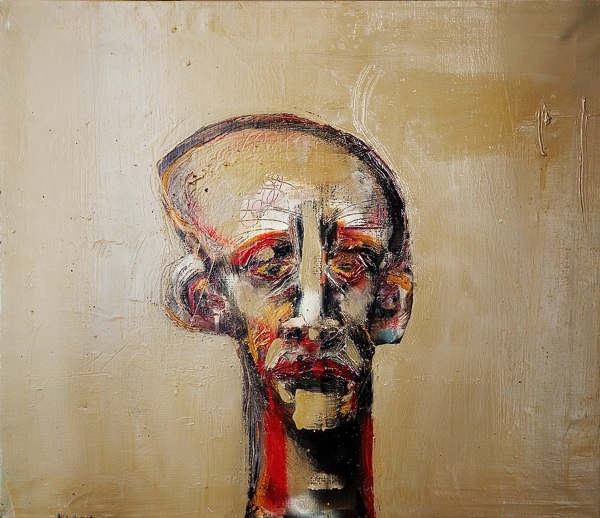 Here and there, the outspoken side of Mellencamp peeks through the more formal pieces. Two dogs, defined in a frenzy of color, leap out of Gates of Hell, which is dynamic and eye-catching. Recent works, such as Scooter (2012) and its thick, compressive background overlapping scrapes, scribbles, and a mesh of bold strokes, manage to bring the intensity of the commentary pieces into the restraint of the portrait series. These combinations blend two voices into a new verse, leading the audience to anticipate what the work, like its painter, will sing next.

Nothing Like I Planned: The Art of John Mellencamp continues through June 10th at the Tennessee State Museum, located downtown Nashville. View the works Tuesday through Saturday, 10 a.m. to 5 p.m., and Sundays 1 to 5 p.m.; admission to the museum is free.