John Mellencamp is famous for his music: He has recorded 24 albums, including the iconic American Fool, which features “Hurts So Good” and “Jack & Diane.” He is also a respected artist whose paintings and other works have been exhibited across the U.S. And so he established this intimate studio in New York City when he started to date Meg Ryan (the two became engaged in 2018). “To live an artist’s life, you have to create every day,” he says. “When I was there, there was no place for me to paint, no place for me to write, so I bought this little place.”

He chose New York’s SoHo because of its short distance from Ryan’s primary home, which is in Tribeca—and, because it reminds him of the enchanted streets he discovered in his 20s, when he first arrived from Seymour, Indiana. “I ended up going to New York and throwing all my cards on the table,” he recalls. “I had a tape of me singing and a few of my paintings. The record companies wanted to give me money and the Art Students League wanted to take my money. So, I said, ‘I’m going this way.’”

For the interiors, Mellencamp hired Trevor Goff, who has decorated most of the musician’s homes. “We met when he was decorating my manager’s apartment on the Upper East Side in New York in 1977,” he says. “We’ve been friends ever since. Trevor and I are like two old women with handbags. That’s our relationship. Trevor goes on the road with me so that I have someone to bicker with.”

There’s a moodiness to the industrial-style studio, which features exposed brick and pipes. Steel doors and drawers have been introduced to define and delineate the interiors. Elements (such as mirrors) were introduced to enhance the space's bones. For example, the remains of what were once windows (in the back of the studio) were reimagined with the installation of lights and multipaned frames. Goff shares: “It’s a long, narrow space, and when we were drilling into the dry wall, we found all this old brick and some old window frames that had old molding from 1885. We tried to set up a different illusion of windows and light.” The space also benefits from the three mirrors that Mellencamp created: “There’s a restaurant that I like called Balthazar and they have these beautiful mirrors. I figured out how to make them and how to make them look old—and how to insert images behind the glass, which makes them look ghosted.”

a dimly lit bedroom with a bed and a desk and a large mirror
Mellencamp discovered the oak-wood bed in one of his six warehouses in Bloomington, Indiana, which he has filled with his furniture and other collections. The bedding is from Roman and Williams Guild in New York City.

Mellencamp creates and works in the heart of the studio—which is the one area that is decorated with his paintings. The dark hues and German influences echo the emotion and heaviness of the interiors. “I think there has to be a certain amount of anger in songwriting and in painting and in poetry and in writing books,” he says. “There has to be anger—though maybe I’m using the wrong word. It could be passion. I think that my paintings have some passion to them. Could the paint be applied better? Yes. Could the shapes be more exact? Yes. But I don’t want them to be. I want there to be a certain amount of life and a certain amount of amateurism involved. In painting and in song, you have to ask yourself, Is it beautiful? And that’s all you have to know.”

The furnishings were selected from Mellencamp’s store (Antiquated Fine Arts) and warehouses in Bloomington, Indiana—including the oak bed that’s used by his children when they are in town. “I never throw anything away—never,” he says, noting that he keeps six warehouses that are filled with furniture, art, magazines, and musical instruments. And cars and motorcycles. “I have furniture that I bought when I first started buying furniture in my 20s. I have clothing that would not fit me at all. I don’t throw anything away—not a drawing, nothing.” And so it is, here in his curated Soho loft, that Mellencamp can also claim the New York of his youth. 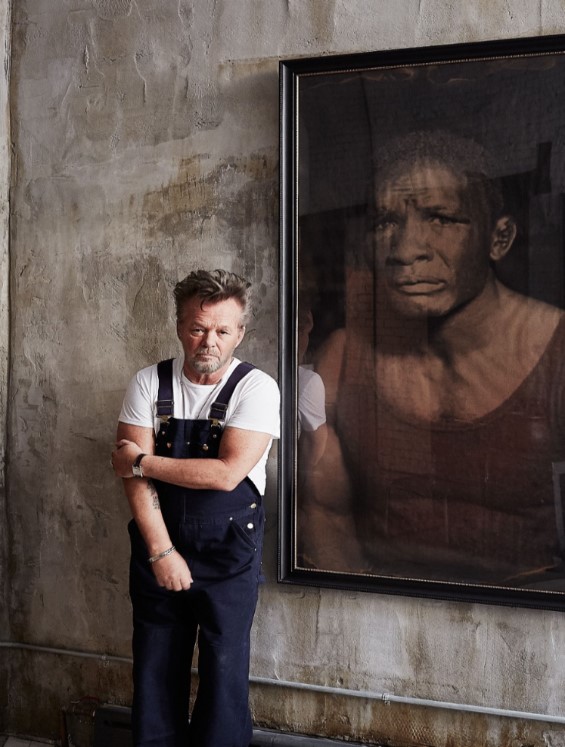