John Mellencamp Performs Trouble No More Live At Town Hall documents John performing material from his 2003 studio album Trouble No More, a collection of classic folk and blues songs that had been an inspiration to and influence on Mellencamp. The live album comes from a July 31, 2003 New York City show at Town Hall, one of only two shows performed upon the release of Trouble No More. The album, to be released on July 8, 2014, features many of the songs from the Trouble No More album as well as rootsy versions of  "Small Town" "Paper In Fire" and "Pink Houses" along with an inspired cover of "Highway 61 Revisited."

The CD and digital audio packages both feature the complete 15-song concert, while the vinyl LP highlights 10 performances from the show are available now for pre-order at Amazon.com 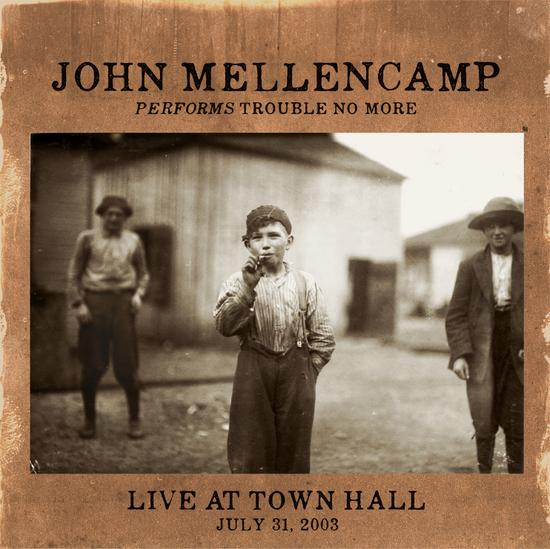 John Mellencamp has entered into a long term agreement with Universal Music Enterprises (UMe) to manage his entire Universal Music Group recorded catalog, spanning the music legend’s Riva and Mercury years. The deal further expands the existing relationship between Mellencamp and UMe to curate and release material from his vast body of work over the next several years. On July 8, UMe debuts the newly mixed and mastered concert recording, John Mellencamp Performs Trouble No More Live At Town Hall, on CD, digital and vinyl LP formats.

UMe President and CEO Bruce Resnikoff says, “Universal Music Enterprises and John Mellencamp have worked together very closely for many years. With his personal direction and trust in our team to properly execute his vision, UMe has long managed John Mellencamp’s extensive Mercury catalog. We’re very pleased to build on our strong relationship with this new agreement to bring the recordings John created during his Riva tenure under UMe management, as well.”

Released in June 2003, John Mellencamp’s Trouble No More was received with universal critical acclaim and a No. 1 debut on Billboard’s Blues chart. Featuring Mellencamp and his band’s spirited take on 11 American folk and blues classics, including Robert Johnson’s “Stones In My Passway,” Son House’s “Death Letter,” Woody Guthrie’s “Johnny Hart,” Willie Dixon’s “Down In The Bottom,” Lucinda Williams’ “Lafayette,” and several others, the album was recorded and mixed in just 17 days, capturing the sessions’ bounding energy.

John Mellencamp Performs Trouble No More Live At Town Hall was recorded by Kooster McAllister (Record Plant remote truck), produced by Mike Wanchic, mixed by Paul Mahern and mastered by Gavin Lurrsen. The CD and digital audio packages both feature the complete 15-song concert, while the vinyl LP highlights 10 performances from the show. All three configurations include a new liner notes essay by Bob Merlis.

“The Voice of the Heartland” has touched the hearts and souls of music listeners and influenced American culture with enduring songs. This fall, John Mellencamp will release his 22nd full-length album, Plain Spoken, with Republic Records.