Mellencamp is captured as he creates one of his most acclaimed records, No Better Than This, by going back to the source of the sound he loves. The film includes live footage from his tour with Bob Dylan and Willie Nelson from the same summer as the creation of the album. It's About You, is available now for PRE ORDER on Amazon.com for a 30% discount. The Bluray/DVD will be released June 5th. Pre order now via the Mellencamp.com Store.

John Mellencamp It's About You

The Rock and Roll Hall of Famer Is Seen in Concert and Recording His Latest Album in the Revealing Film, Coming to MPI Blu-ray and DVD on June 5, 2012

John Mellencamp has scored dozens of Top 40 hits, has been Grammy-nominated 13 times, and is a member of the Rock and Roll Hall of Fame, but not even his biggest fans have seen the artist revealed in the intimate music documentary John Mellencamp It's About You.  The movie, which follows the singer on tour and in the recording studio, comes to high-definition, audio-enhanced Blu-ray and DVD from MPI Home Video on June 5, 2012, with SRPs, respectively, of $29.98 and $24.98.

Over a career spanning 35 years, John Mellencamp has drawn inspiration from his native Midwest to create songs that speak to all of America and the world. His classics, like “Small Town,” “Jack & Diane” and “Pink Houses,” tell powerful, poignant stories of ordinary people trying to live their lives with meaning and integrity. John Mellencamp It's About You is the first inside look at the man behind those beloved songs.

The movie’s co-directors, famed photographer Kurt Marcus and his son Ian, travel along with Mellencamp on his 2009 concert tour with Bob Dylan and Willie Nelson. They also film the writing and recording of Mellencamp’s universally acclaimed 2010 album No Better Than This, the sessions for which took place at several American musical landmarks. We see Mellencamp at Sun Studio in Memphis, where Elvis Presley recorded his breakthrough classics, and recording (with a mono tape recorder more than half a century old) in the same San Antonio hotel room where legendary bluesman Robert Johnson created his seminal work.

The Markuses shoot in Super 8 to visually echo the authentic Americana that resonates in Mellencamp’s music. Along the way, the rocker reveals an emotional and contemplative side never before seen by the public, in a career-spanning film that becomes a soulful meditation on his beloved heartland.

John Mellencamp It's About You received widespread critical praise upon its theatrical release by MPI. “[Mellencamp’ music] digs deeply into the soil of working-class American life in songs that express the defiance, despair and nobility of people who refuse to go down without a fight,” wrote Stephen Holden of The New York Times. “Markus and his son capture the poetic melancholy of a mostly rural America with an eloquence that recalls the photographs of Robert Frank,” said Peter Rainer of the Christian Science Monitor.

Movieline’s Stephanie Zacharek called the movie “startling in its perceptions,” while The Wall Street Journal’s Joe Morgenstern called it “a touching little film.” And Gary Goldstein of the Los Angeles Times said it’s “an unhurried, visually compelling look at a man and his music – as well as of a bygone America.”

By ROLLING STONE
In 2009, Kurt and Ian Marcus traveled with John Mellencamp on his tour with Bob Dylan and Willie Nelson, documenting the experience and filming Mellencamp as he wrote and recorded his 2010 record No Better Than This. In this clip, taken in July 2009, Mellencamp records the album cut "Coming Down the Road" with Jay Bellerose, David Roe, T Bone Burnett and Andy York in Memphis' historical Sun Studios. Shot in Super 8 like the rest of the film, the visuals give a timeless quality to one of America's most beloved songwriters.The documentary, John Mellencamp: It's About You, will be available on DVD and Blu-ray on June 5th.

It's About You - Clip 1: Recording No One Cares About Me


It's About You - Clip 2: Recording Coming Down The Road


Its About You - Clip 4: Recording Someday The Rains Will Fall 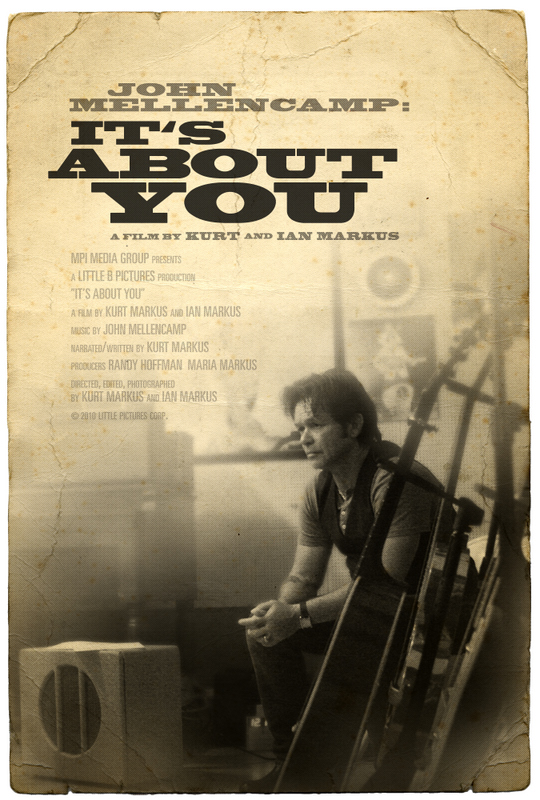 John Mellencamp It's About You

It's About You is a new musical documentary that offers a rare and intimate look at the life and music of Rock and Roll Hall of Famer John Mellencamp. The film premiered at this year’s SXSW festival and follows Mellencamp on his summer 2009 concert tour and during the recording of his most recent album, 2010’s universally acclaimed No Better Than This, the sessions for which took place at American musical and historical landmarks, including Sun Studios in Memphis and the First African Baptist Church in Savannah, GA. We see Mellencamp recording – with a single mike and mono tape recorder more than half a century old – in the same hotel room where legendary bluesman Robert Johnson created some of his most memorable work. Along the way, Mellencamp reveals a side not often seen by the public, in a film that becomes a soulful, highly personal meditation on small-town America.

Kurt Markus’ photography has appeared in such leading publications as Vanity Fair, Rolling Stone, GQ and The New York Times Magazine, and he has shot cutting-edge ad campaigns for BMW, Armani, Nike and other companies. His unique vision has been brought to bear on It's About You, which was shot on Super 8 and whose vintage Americana look is the cinematic equivalent of a well-worn pair of jeans.
RT: 80 Minutes
Rated: NR