TENNESSEE STATE MUSEUM TO EXHIBIT THE ARTWORK OF JOHN MELLENCAMP

The paintings of John Mellencamp will be featured in his first museum exhibition, Nothing Like I Planned: The Art of John Mellencamp, 12 April 2012 to 10 June 2012 at the Tennessee State Museum in Nashville. Organized by curator Renee White, the exhibition contains 52 paintings, spanning four decades of output. Lois Riggins-Ezzell, Executive Director of the museum and a longtime supporter said, “For more than 30 years, I have been an ardent admirer of John Mellencamp, the heartland rock and populist champion of the people. More recently, I’ve become a serious devotee of John Mellencamp, the extraordinarily talented artist. We are very pleased to introduce John Mellencamp the Artist to a museum audience.”

Born in 1951 in Seymour, Indiana, a descendent of German immigrants, Mellencamp played music from the age of fourteen. His interest in painting came even earlier. “I started messing around with oil paints when I was about ten but, you know, without instruction,” he remembers.

Eventually, he focused on music, and by 1980, was earning accolades. Two years later, he won a Grammy. Even with a string of hit recordings reflecting diverse musical styles and innovating what would come to be known as the Americana genre, Mellencamp continued painting as a means of personal self-exploration. His first subjects were friends, family and landscapes reminiscent of the French impressionists. Mellencamp’s formal art training was sparse. “I briefly studied at the New York Art Students League. There was so much information that I’m, to this day, still trying to learn and put into practice what my teacher taught me back then,” he admits.

The award-winning songwriter, actor and musician shuns being designated “rock star” or “pop singer” and has a long history of musical exploration and innovation. One of his current projects is Ghost Brothers of Darkland County, a musical in collaboration with(hyphen) best-selling author Stephen King. He has long strived to use his music to promote social justice, and to underscore the plight of the American family farmer. He was acknowledged for these efforts with both the Woody Guthrie Award and ASCAP Foundation’s Champion Award.

Bringing the weight of personal history to both his music and art, Mellencamp always returns home to the state of Indiana where he still resides. A testament to the power of place and authenticity permeates his works.

His portraiture has evolved to a personal style that some critics describe as similar to the dark and shadowy paintings of the German Expressionists. This search for expressiveness by means of exaggeration and distortion of line and color in favor of a simplified style intended to carry an emotional impact is seen in the recent oil painting, Savannah GA. 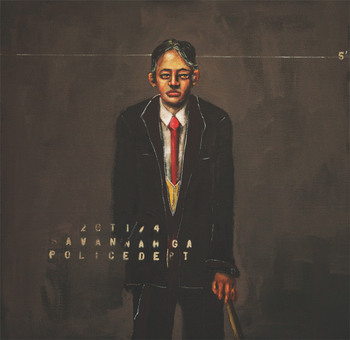 Mellencamp, like German Expressionist Max Beckmann, exalts the individual, a man standing in full frontal pose opposite the viewer. With arms out of sync with each other, the facial expression is dour and contemplative. There is an intense aspect of an inner world, an emotional force, something that explains why this style, like those earlier German Expressionism, is best manifested in times of social crisis and upheaval. Mellencamp understands the inequality of modern society. His realism is inseparable from his philosophical concerns; he provokes so that people will ask questions about the world around them. When asked about his work, Mellencamp responded, “I learned a long time ago that you can’t control what people think. Do I have a mission of what I want to accomplish with this? I’ve already accomplished it. There it is. There’s the song. There’s the painting.”

A fully illustrated color catalogue with an essay by nationally- known) art writer, Hilarie M. Sheets will accompany the exhibition.

The Tennessee State Museum is open free to the public. Hours are: Tuesday-Saturday 10 A.M. to 5 P.M.; Sunday 1 to 5 P.M. Closed Mondays. 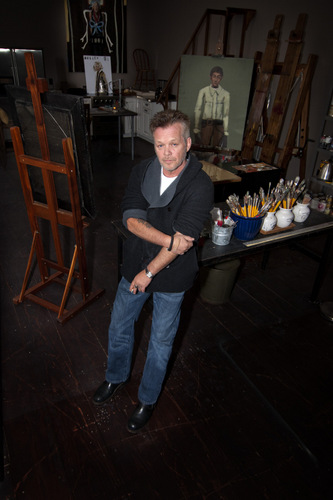