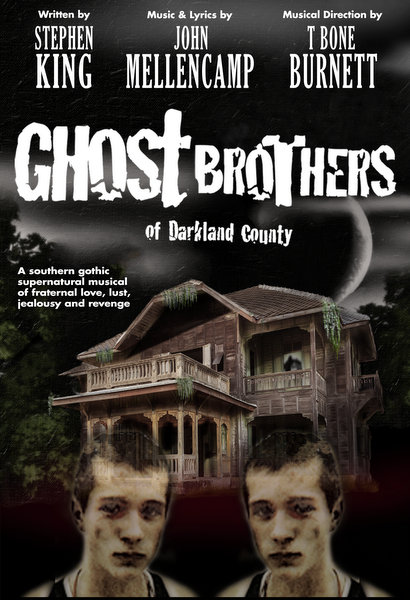 AEG Live announced today the southern gothic, supernatural musical Ghost Brothers of Darkland County will tour across North America this Fall. Written by best-selling author Stephen King, with music by Rock and Roll Hall of Famer John Mellencamp, and musical direction by Grammy Award-winning T Bone Burnett, the tour kicks off right outside Bangor, ME at the Collins Center For The Arts in Orono, ME, on November 8, travelling through cities such as Toronto, Chicago, New York, and Los Angeles before wrapping in San Francisco on December 5. Tickets for the performances go on sale June 20 atwww.axs.com unless otherwise noted.

This extraordinary collaboration 16 years in the making is a haunting tale of fraternal love, lust, jealousy and revenge, performed by an ensemble cast of 15 actors and a four-piece live band, comprised of members of John Mellencamp’s band. The staging of Ghost Brothers is an amalgam of different styles – both old fashioned, resembling an old-style radio show, and yet, modern and unique in its interactive use of storytelling, music and singing to move the macabre Ghost Brothers story forward.

The story goes that Joe McCandless saw his two older brothers battle over a girl which ended in the unfortunate deaths of all three. Now with Joe as an adult and two boys of his own, he’s watching an all too familiar scenario play out before his eyes. As the story continues, a malevolent Shape circles the stage, singing about heaven and hell. Joe McCandless lingers in the dream-land café, remembering the events of his life, and is urged to action by the friendly bartender. In 2007, he goes to his family cabin in Darkland County, Mississippi, where his brothers died in 1967, to tell his own sons Frank and Drake his tale of brotherly love gone sour. With his sons at each other’s throats, Joe’s story will either save or destroy the McCandless family. Will Joe bring himself to tell the truth in time to save his own sons? Find out whether the ghosts left behind will help him—or tear the McCandless family apart forever.

After Mellencamp brought the story idea to King and the musical developed, it became clear to the collaborators that Ghost Brothers had taken them into unfamiliar territory — and they liked it that way. "John can make rock & roll records and I can write books for the rest of our lives," says King, "but that’s the safe way to do it, and that’s no way to live if you want to stay creative. We were willing to be educated, and at our age, that’s an accomplishment." Eventually they enlisted T Bone Burnett, who has produced Mellencamp’s last two albums, as well as Grammy-winning albums like “O Brother, Where Art Thou?” and the Robert Plant-Alison Krauss collaboration “Raising Sand”, to bring his signature shadowy ambience to the music.

Throughout the production, the eerie blues ‘n’ roots music reveals the inner workings of the characters as opposed to just propelling the play’s narrative, with the only a few songs directly advancing the plot. Acclaimed director Susan Booth, the Jennings Hertz Artistic Director, who calls the musical a “a kind of new age travelling medicine show” explains, “I want the emphasis to be on this fantastic score and our great singers and how the story advances us from song to song. In most musicals, the songs advance the narrative. With Ghost Brothers, the story will advance the songs.”